This page is for Rescues who we have looked into or have been recommended, however, please make your own enquiries from the rescue and satisfy yourself. Whilst we put rescues on here, we do not extend recommendations to anyone and it is your choice as to where you source your pet from. We do not accept any liability for any decisions made.

Phoenix Rehoming is a charity based in Hampshire and operates in the South of England. We were awarded the prestigious “Rescue of the Year 2021” award at the Animal Star Awards held in Portsmouth in February 2021.

The charity was established in 2016 and has now rehomed 1504 dogs. We rescue dogs from the U.K. and overseas. Any dog, for any reason, from anywhere. We are staffed entirely by volunteers, the charity can dedicate 100% of its donations to helping dogs in need.

The charity has an unrivalled ethical and professional approach. We are members of Kids Around Dogs the institute of Modern Dog Training, the Pet Professional Guild, the Pet Industry Advocacy International and the U.K. Dog Behaviour & Training Charter.

The year goal is to identify and purchase land within Hampshire to enable a rehabilitation and training centre to be built. We welcome all and any help with identifying a suitable field! Ideally around the Fareham area.

The charity has been successful largely due to the good will of sone amazing foster carers who are willing to care for rescue dogs in their own home. We are always desperate for more foster carers and welcome applications from dog loving people within Hampshire and surrounding areas.

Hope Rescue  is a registered charity (number 1129629) that saves stray & abandoned dogs in South Wales. We operate from a rescue centre in Llanharan

Here we go again. Right now we have over 230 dogs in our care across the rescue and foster homes. Many of them can’t move due to ongoing investigations. What very little space we have needs to be reserved to ensure we can fulfil our three stray dog contracts for genuine strays, as well as taking the unclaimed strays from another three local authorities. Over the last few weeks, we have had not one, but nine apparant fake strays. We’re facing an animal welfare crisis with owners abandoning their pets almost daily.

Most of them we had received surrender calls for earlier in the day and had explained we didn’t have space and suggested other rescues to try. But rather than do that or wait for a space, the owners have decided to lie, putting not only Hope Rescue in a very vulnerable position, but also jumping the queue ahead of other desperate owners who have done the right thing and reached out asking for help on our waiting list. Some of those owners on our waiting list really, really need our help due to issues such as poor health, the death of the owner, or a tragic change in circumstances but are pushed further down the list due to the fake strays.

Many of these dogs also have health problems which may well be the reason they have been abandoned. Our vet bills are through the roof and we are trying to manage them the best we can. With the cost of living crisis, fundraising is also understandably difficult right now. It’s not fair, and we can’t tell you how angry we are right now that as a charity who chooses to do the most difficult of rescue work – stray dogs – that we are being taken advantage of in this way. Of course, as always, we will make sure the dogs get the very best care – it’s not their fault their owners chose to abandon them. 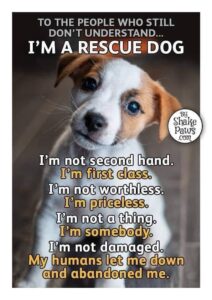